5 Navy SEALs Crushing It in Business 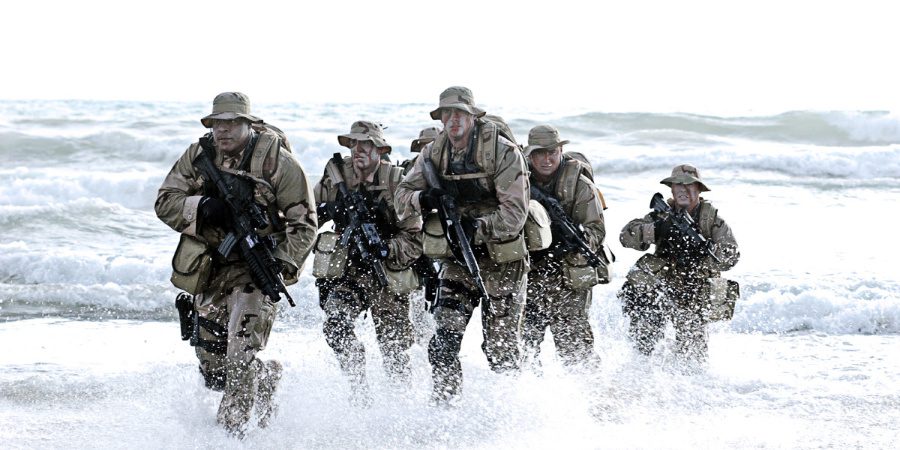 Two years ago I was in an Uber BLACK on the way to see Joe Rogan live. Some big-time businesspeople were with me. On the way to the event, we were to stop and pick up the guy “SEAL” from the book Living with a SEAL. I had read the book and was excited to meet this dude. As soon as he got in the Uber, it was quiet. We had an awkward moment of respect for such a bad motherfucker being in our presence.

That SEAL’s name is David Goggins.

Since then, he’s gone on to be a bestselling author and one of the most famous Navy SEALs of all time. He’s well known for his book Can’t Hurt Me as well as breaking several world records in fitness.
After Joe Rogan was over, I offered to take David back to the airport the following day. When I picked him up, we got to talking about business. He told me he’d made $70,000 a year as a SEAL for like 19 years. He’s now paid as much as $100K to speak at events. He told me “Ryan, just 2-3 speaking gigs a year makes me rich. I’m used to living on a military salary; to me, this is what it’s like being Bill Gates.”

It got me to thinking…

Being a Navy SEAL isn’t really about being physically fit. David Goggins proved that in his book. It’s more about being mentally fit. Navy SEALs become Navy SEALs because of their minds, not their bodies. Business people crush it at business for the same exact reasons. This gives Navy SEALs a serious edge in the business world when they leave the service.

The first time I ever met a real-life Navy SEAL, I was 14.

He owned a gun store and a demolition company. He had taken the skills he learned in the Navy and opened two successful businesses with them. He was living his dream life, getting paid to blow shit up and shoot guns. It was just like the SEALs without being bombed or shot at.
Over the years, I’ve been fortunate enough to meet quite a few Navy SEALs. I’ve never met one who wasn’t successful. Whether they owned their business or worked for someone else, they are always elite at anything they do. I wouldn’t expect anything less from them.

Because of that program, I met a dude named Ryan Williams. Ryan was a Seal for 10 years and lives in SoCal. As soon as I met him before I knew he was a SEAL, I saw he was a badass. Game recognizes game every time. As we got to talking and over time became good friends, I’ve learned a lot from him.
After Ryan did his time, he started his own business. Industry Threadworks is a t-shirt manufacturing company based in California. His company prints and fulfills t-shirt orders for vendors and websites all around the globe. His keen eye for detail and his Navy SEAL-trained mind for problem-solving has helped him create a 7-figure business from scratch.
At the same event, where I met Ryan Williams, I also got to meet another true American hero named Robert O’Neil.

Rob is the dude who shot that piece of shit, Osama Bin Laden, in the face three times.

Yes, he’s the SEAL who pulled the trigger and killed the biggest terrorist in American history.  Robert O’Neil is a country boy from Montana who loves to shoot. He took his shooting skills and winning mindset to the Navy and eventually became one of the top Navy SEALs of all time.
Nowadays, Robert is crushing it in his speaking business. He’s traveling all over the country delivering the most powerful keynote speech on mindset you will ever hear. I had the esteemed pleasure of seeing him on stage on 9/11/18 a day I will never forget. His speech is the best I’ve ever heard. It’s no wonder he’s in high demand as a keynote speaker.
I’m a BIG Joe Rogan fan. After all, that’s how this whole article started off. A few years ago, Rogan started talking about Jocko Willink. He’s a former SEAL who has written a book that has gone on to be a bestseller called Extreme Ownership. It’s one of the best leadership books ever written. If you haven’t read it, you need to get on Amazon and order it today.
Jocko has gone on to leverage that book and his experience as a SEAL leader, into teaching corporations how to create and encourage a leadership culture. He has an entire team of trainers who travel the globe teaching leadership to corporations. Jocko is one of the most sought-after leadership trainers in the world. He’s not cheap either. He knows his value and is making a fortune teaching his mindset to other leaders as well as through his speaking gigs and bestselling books.

He’s best known as the Lone Survivor but he’s also quite the businessman. He has a top-rated podcast, has had a movie made about him as well as does speaking gigs all around the world. His story is one of the most inspiring tales you’ll ever hear about the sheer will to survive and return home. This man is a living legend.
Marcus has a story like no one else’s. He’s seen some shit and most people wouldn’t want to live their real-life nightmare over and over again, but Marcus is using his darkest moment to inspire people from all over. He’s on news channels, seminars, conferences and more. He’s leveraged the nightmare in his life to be a lesson for the masses. Because of that, he’s crushing it right now.
As a man, I can’t help but look at SEALs as heroes. I’ve thought that way about them my entire life. I love seeing these guys leave the military and crush it in business. It’s as if the universe is really rewarding them for the service time they put in. I’m glad they’ve not only served our country well but are now serving the public well by sharing their stories of trials and triumph.
Gentlemen, on behalf of the entire Closernation, I’d like to thank you for your service on the battlefield in business and war.
← ReWire 245: Making Your Time Count ReWire 246: Our Brains Are Wired To Be Negative →