5 Reasons Why Your Prospects Keep Telling You “NO” 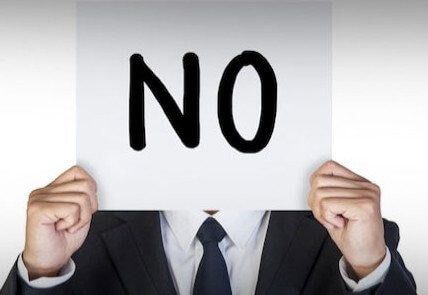 When you made the decision to jump into sales did you think it would be this hard to get people to say “yes” to shit that could improve their life? Fuck no you didn’t or you wouldn’t have ever got into sales in the first place. Now that you’re here though, you probably feel stuck.    Salespeople everywhere are stuck like folks in a Georgia snowstorm. Waiting to be rescued. It’s a horrible rut to be in. It’s hard as hell to climb out of and most people can’t do it alone.

Here’s 5 reasons why you can’t close your way out of an open door.

Reason #1 EGO:
There’s this big thing called an EGO that gets in the way of asking for help or admitting being stuck. EGO costs salespeople so much money it’s uncountable. It’s not just salespeople either. I read an article somewhere not to long ago that said most people end up filing BK that could avoid it. The main reason being pride [ego] and not asking those around them for help or advice. Sad.   I’d be willing to bet your EGO is one of the main reasons your prospects keep rejecting your pitches like A-Rod batting against a rookie. While EGO is probably the main interruption between you and a sale, it’s not the only one.

Reason #2 Belief:
Most salesmen’s beliefs are fucked. We’ve been abused and hated on most of our lives and ALL of our careers. We end up taking an opportunity to make a sale and living over an opportunity to believe in what we’re selling.  Salesmen bounce from job to job a lot. This causes the survival mechanism to kick in. The survival mechanism keeps you in a job you need, opposed to one you believe in. This problem is not limited to sales people it’s rampant all over the corporate world.   When you
r boss treats you like shit and you hear tons of customer complaints it’s hard to believe 100% in what you’re selling. Matter of fact it’s damn near impossible unless you’re a sociopath. When you’re trying to convince your prospects to buy, the mixed signal you send them keeps them from closing. It’s almost as if they can hear the same voice you hear in your head.

Reason #3 Chatter:
Anyone ever tell you, you talk to fucking much? You might have thought they were being rude but in reality they were giving you much needed correction. I’ve seen countless salesmen talk their way into and out of a sale in the same sitting.   Here’s why this happens. Most salespeople feel like if they can get the prospect to talk they can read them. Where the confusion sets in is when the salesman won’t shut up. When this happens the prospect is the one who’s doing all the reading of the situation.   Talking too much does several negative things to a sales convo. It takes talking time away from your prospects. Too detailed of an explanation may come off ass overkill and too much work in the mind of your potential sales victim. The best way to stop talking so much is to start asking questions.

Reason #4 Exhaustion:
Are you getting exercise? Are you sleeping at night? If you answered NO to either of those questions this is part of what’s keeping you from closing more sales. If you are tired and exhausted on the phone or in your presentations prospects won’t buy.   People buy from good looking, energetic salesmen. Prospects want the sales process to be fun and exciting. Las Vegas is a great example. LV gets you to blow ALL your money. How? Fast pace, fun and never ending energy. Take note as a salesman. Energy sells and if you are lacking it, you will be lacking sales.   You need to be in a state of enthusiasm and energy if you want to be top producer. Not only that, you need to be mentally sharp too. If you’re not 100% on top of your game, why should anyone want to close a deal with you?

Reason #5 Confidence:
Last but not least, let’s whip out the doozie. We talked about believing in your product but what about believing in your own ability. If you have personal doubts you can be FOR SURE that your prospects will sense it and run from you like you’re about to rob them.   If you’re tired, your boss is an asshole and your product sucks it’s hard as hell to be confident in your sales ability. I worked at a bank in Texas that fucking sucked. The underwriters were cunts, the owner was an asshole and management were straight dick suckers of the owner. Customers hated the process and everyone involved.   The way I was able to maintain my status as a closer in this environment is the fact that I took action on my own to make shit happen. Who are we kidding? Most salesmen would roll over and play victim but not me. I made it my mission to fix the problem. i failed but my clients loved me.   Most of you can’t roll like that though and you give up. No matter what your situation if you believe in yourself you will make the most of it. If it’s meant to be, it’s up to me. Nuff said.   If you suffer from lack of closings or maybe you’re just worn out and need a new shot of energy in your life. i can help. Fill out the form below and let’s chat. We can talk about your business, your problem and the solution. You and me can dominate but you have to reach out to me. I can help you overcome these 5 issues and more.   Meanwhile don’t pay attention to these 5 traits of non-closes and make sure you don’t fall victim to the cycle I just explained to you. oh and ll this is useless unless you actually take action and do something.

← Reasons Why You Should Bribe, Extort and Force Your Clients into Gangs Avoid Winding Up In The Friend Zone With Your Prospects →