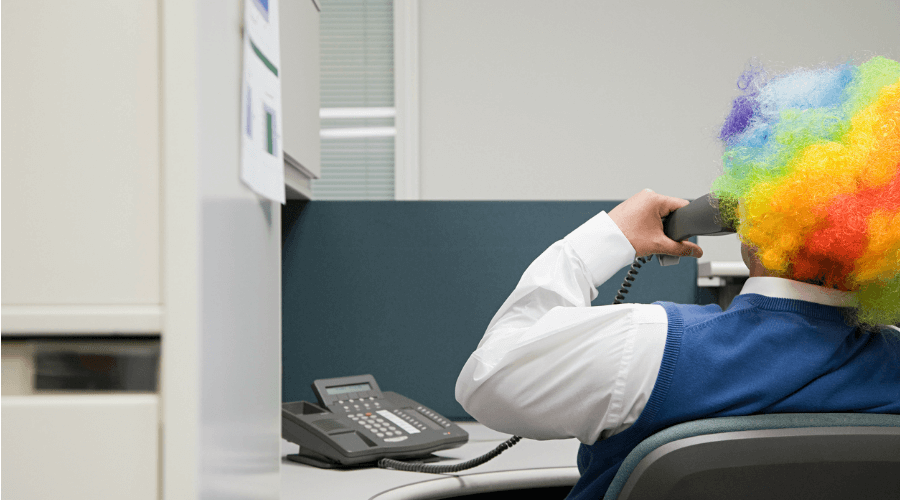 Being in sales is a lot like being in a fraternity. There can be lots of drinking, partying and hazing going on. The new guys have it the hardest and there’s a prank or joke around every corner. Sales is a tough job so us old schoolers do our best to make it fun. Hazing the new guy is a big part of that fun.
Working in sales you will spend the majority of your time each week with the same people doing the same old sh*t. In order to make that work long term, you gotta make sure the people in your crew are all-in. You also gotta make sure they can take a joke because this job requires thick skin.

I went through it dammit, so the new guys have to go through it, too.

It’s all a part of perpetuating the torment. It’s also all in fun. If the new guy can survive the hazing, he’ll make a good addition and a good hazer when the next new guy shows up.
Cut Their Tie: In 2011, I sold cars for about six months. On my very first day, I closed a deal and after work, this big dude named Robert called me over to the desk. When I say “big” this f*cker was 6’4″ 280 pounds and looked like a cop with a flat top and all. He stared right at me and said, “I”m gonna cut your tie off. You can make it easy or hard. Your choice”
Of course, I just let him cut my tie. I had borrowed it from my friend Mike, so I really didn’t give a f*ck anyway. It was all in fun and I watched Robert cut a lot of ties in six months. Some guys tried to get out of it while the best salespeople just embraced it and let it happen. Either way, Robert always cut their ties.
Being Loud While They Are on the Phone: When I worked at a mortgage company in Dallas, Texas, it was 2008 and there were a lot of LOs coming and going during that time. We had a constant flow of new people every single month. We would wait until they got settled in their cube and us vets would go right outside and wait for them to pick up the phone and start dialing. As soon as they got someone on the line we would start yelling and talking loudly about inappropriate things.
One time, my homie, Rick cut a hole in a pizza box and stuffed his dick in it. He then waited for the new guy to get on the phone, walked over to him, asked him if he wanted a piece of pizza then opened the box for him. The dude screamed about 10 cuss words all while still on the phone with the prospect. HR was not happy.
The Prank Sales Call: Have you ever called one of the new guys and acted like a prospect? It’s one of my favorite things to do and I still do it every time we hire a new sales rep. I call them up, pretend to be interested and ask the most outrageous questions I can think of. Every time they try to close me I give them another objection. I’ll put them through more hurdles than they can count and then leave them high and dry to see how they react.
One time, at the car dealership, we called a new guy up and told him we wanted to buy this Laguna Secca Mustang at $5K over sticker and were coming in at 3pm. It was the salesman’s half day and he was supposed to leave at noon. At 3pm I called and said I was running an hour late. I kept him there all day and there was never a sale to be made.
The Flirty Prospect: One time, at this mortgage company I worked for I had one of my home girls apply for a mortgage face-to-face with the new guy. She called in, asked if she could come fill out an app and insisted on doing it in person. While in the application booth she would shift her boobs and make obscene gestures every time he looked at her.
At the end of the interview, the dude was all hot and bothered and asked her on a date. She pretended to be offended and threatened to complain to HR that he was harassing her and coming on to her. He left that room in shock and never took a face-to-face app with a single woman without leaving the door open.
The Non-Existent Necessity: We’ve all heard of things like blinker fluid and air cleanser. You know, things you tell new people you need but that don’t really exist. In the mortgage world I would make up names of fake documents and tell the new guys they had to have those docs filled out or the loan would not fund. They would spend hours scrolling the millions of docs in the system trying to find the ones that didn’t exist.
When you’re new, you have no clue. Especially if you’re so new you’ve never closed your first sale. The old school vets that have been on the job are always gonna get the best of you but it’s all in the spirit of competitiveness and fun. What I’ve noticed is that the best salespeople take it in stride and dish it out when it’s their turn.
Next time you get a new guy on deck, hit him with one of these five pranks and you’ll be laughing your ass off for days. Also, if you’re not brand new and you’re already earning six figures annually or more in sales, I want to talk to you about being a part of my mastermind. Find out all the details at www.breakfreeacademy.com/entourage
← Book Review: The Dirt by Motley Crue and Neil Strauss 19 Catchy Phrases All Top-Producing Salespeople Say →