A Lesson In Success and Personal Responsibility From Steve Harvey 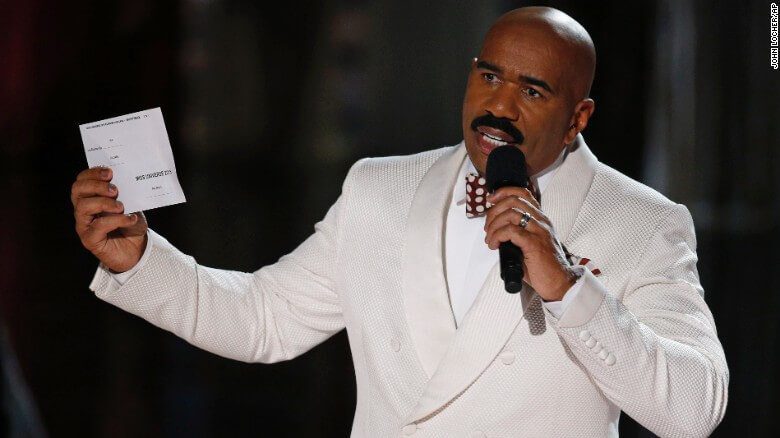 The Miss Universe debacle that Steve Harvey recently found himself the center of,  has made for great entertainment on the web. Not since Kim Kardashian’s break the internet thing, have we seen so many hilarious memes about one person in such a short amount of time.
This week, my newsfeed was flooded with “Happy Easter” and “The look when you win after all” memes. Apparently Steve misread the card and announced second place as the winner of the competition. I mean, why do they call it “first runner up” anyway? Just call it “second place” I’d be confused too.

That’s not my point though

Despite what happened and having a mad Colombian woman who wants him dead, Steve Harvey has handled himself with an extreme amount of dignity. Even when it happened, live on TV, he immediately took responsibility and said “It’s my fault, I read it wrong, it’s right there on the card. I’m sorry. I’t s my fault”
In today’s times, this is rare. It’s rare for anyone, let alone a powerful celebrity, to admit they were wrong and take responsibility for their actions. Had this been pretty much anyone else, they would have pointed the blame on the card writer and got him fired, so they could spare their rep. Not Steve, he immediately owned up and said “sorry”

If you make a mistake, own it

Steve Harvey is a good example of a confident man. He’s been one of the hardest working men in entertainment for years. Hosting multiple TV shows, daily radio shows as well as events like Miss Universe.  He’s been working his @ss off mistake free for 3 decades now. He knew that this was his fault and he also was confident enough in his track record to take responsibility and move on.
I’ve been a fan of Steve’s since the Kings of Comedy tour. Matter of fact, we both lived in the same neighborhood at one point. (Willow Bend in Plano, Texas) He’s on 105.7 here every morning and Family Feud at lunch. It’s kinda hard to miss him. The fact that he carries himself the way he does, says what he does and has managed to stay scandal free for so long, says a lot about his character in real life. Then, the one time he is caught in “scandal” he owns up to it and makes it right.
What’s even better, is that Steve Harvey has a multi-year contract with Miss Universe to host it. He’ll be right back in the same place hosting the same event next year. He’s not fired. Top producers who take personal responsibility never get fired. Hollywood probably loves Steve, compared to some of the other whiney crybabies out there.

Taking personal responsibility and owning up to the mistake you have made is a a sign of strong leadership skills. In a time where most people are sheep, showing that you have the confidence to move past your mistakes, is a quality that surely stands out. It takes a mentally tough individual to have the confidence enough to make a mistake, own it, and move past it quickly.
To top it all off, yesterday, on Christmas Day, Steve Harvey posted a picture of himself on social media with the caption “Merry Easter” even further proving he can A: Take a joke and B: Own up to his mistake and move on. It was probably the most shared picture on social media yesterday. 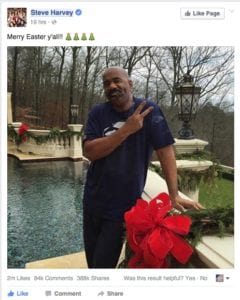 The best part: Steve Harvey has been the #1 trending topic twice in one week.

PT Barnum said “any publicity is good publicity” and I know Steve is enjoying the rising of his stock, even after making what should have been a HUGE, career detouring, mistake.  Take a lesson from one of the greats. If you make a mistake, own it, remedy it and move on from it. Taking responsibility and learning from the mistake will only make you that much better. I guarantee Steve double reads any cue cards before he speaks in the future. Lesson learned. Problem solved.
I’ve taken personal responsibility for my mistakes too. I’ve even put them in a book and shared the lessons from them with the world. It’s increased my stock too. Most people can’t own up for their mistakes, and when the world sees someone who can, they appreciate the authenticity.
If you’re looking for the right information so that you can make 2016 your best year ever, you’re in the right place. Fill out my form below if you’re ready to invest in yourself and take massive action with your business. Don’t waste my time though. If you’re not ready to invest, don’t fill out the form. I need to make room for the action takers first.
← 5 Habits I Formed From Going To Prison That Help Me Crush It In Business Surface Selling: The Fastest Way To Blow Sales And End Up Broke [Audio] →