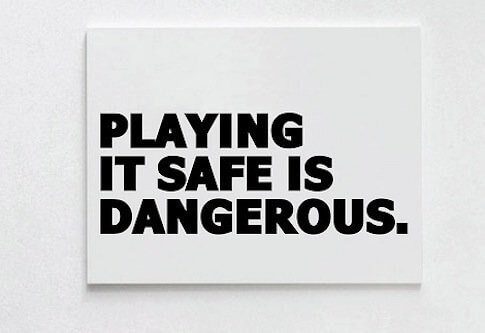 The other day I was on a mountain in Oahu and a friend of mine was talking to me. He was telling me how we are ALL born relentless and as we age society teaches us to relent. All kids are born fearless. They do daredevil shit on the regular. Adults saying ‘I wouldn’t do that” eventually harnesses this freedom of fear.

Think about what that does to us as we grow.

Those of us who have kids say things like “I want my children to have more than I had.” yet we hold them back by giving them the advice to play safe. They grow up trying to play safe instead of the fearlessness God blessed them with.

This shows up later in our lives in multiple areas. We fear earning too much money, we fear what other people might think about us, we listen to losers, and hit upper limits that shouldn’t even be there. From fear of closing or falling short on follow up, it all stems from being told to play safe.

The safer you play in life, the smaller you play. Safety places limitations on us which forces us to play small. The more rules and cautions we have in life, the less likely we are to take action. The less action we take, the smaller the reaction. Hence why playing safely is playing small.

There’s not a single person reading this who doesn’t wish they had more. More money, more freedom, more time, more everything. You can’t get more by constricting your playing range to less.

So why do so many people continue to play small?

It’s been my experience that anyone can share a big mac with you in a t shirt and jeans, very few are cut out to eat in a suit at the Ritz. You’re probably reading this thinking “who would take Micky D’s over the Ritz?” but it’s a leveling issue. People feel like they don’t belong or it’s “not their crowd” but all it is is psychological unworthiness.

It’s also easy to be a big fish in a small pond i.e rich guy at McDonald’s vs rich guy in the Ritz, they are two different levels of rich. Few are willing to stretch enough to be the rich guy at the Ritz. Even though that would be what’s best for them, they have the relent mentality strapped to them.

I can speak from personal experience that when you start playing big those around you will make one of two choices only.

Choice number one is that they will level up and ride with you. Fair Warning! Few will make this choice. This is the harder of the two choices. This choice requires growth and stretching beyond normal and playing BIG right beside you. Not too many are cut out for this path.

Choice number two is that they will continue to play small like they are now. This is the easiest of the two choices because people fear the fuck out of change. Especially exponential and rapid change for the better. Most people would simply like to stay where they are vs trying to go to the next level.

Just because those around you continue to play small doesn’t mean you have to. If you are playing BIg you will find new connections attracted to you along with the folks who choose not to play BIG, falling off. It’s like natural selection for a winner.

The key is for you to keep playing harder and better each day. Never sit idle. If you’re the guy with the most in your circle, it’s time to expand your circle. There’s a difference in a leader playing small for ego and a leader playing big but being led.

If you’re letting rules, other’s and dogma hold you back; let go of that shit. It’s your time. The time is right now for YOU to level up and say “I’m playing big no matter who’s with me” you’ll find that when the right leader stands up, the right people follow.

Fill out the form below and let’s talk about all the cool shit we can do together while making an ass load of cash doing it. Cool?