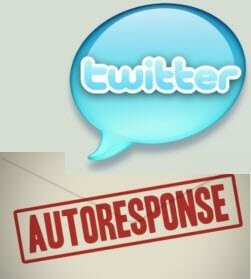 Want to send a direct message (DM) to everyone who follows you on twitter, but don’t have the time? Social Oomph is the best free twitter auto responder out there.

Social Oomph does a lot more than just set you up with a twitter auto responder, it also has a plethora of cool dashboard tools for the majority of your social networking needs.

Many of us are not sure what to write when we set up the twitter auto responder. While can’t tell you exactly what to write, I can tell you a few things not to write in yours.

First thing, Do not offer someone a business opportunity right off the bat. You jut met them for Christ’s sake, how can you right off the jump try to sell or pitch them on something? Would you do this in real life? Are you this awkward in real life? Chances are you said “no” to those questions so don’t try to come off this way on twitter.

Second thing, Do not try to get your followers to connect with you on another social network. Again, you just got them on twitter, why would you ask them to move networks with you? Just because you want to leave, does not mean they do. Think of it as a girl/guy you just met at one club, you would not immediately ask them to leave with you for another club. They would be like “why are you here in the first place?”

Third thing, Don’t try to get them to retweet (RT) your stuff. People RT things they like not things you ask them to. If you really want people to RT you then you need to start by RT’ing them first.

Twitter and social media in general are just like real life. Take a second and think about things before you do them. There are unwritten rules on social media just like life. Trust me though, the two are almost just alike.

Here is a video I made to show you how to set up a free twitter auto responder using Social Oomph. Enjoy the video and tell a friend about this blog.