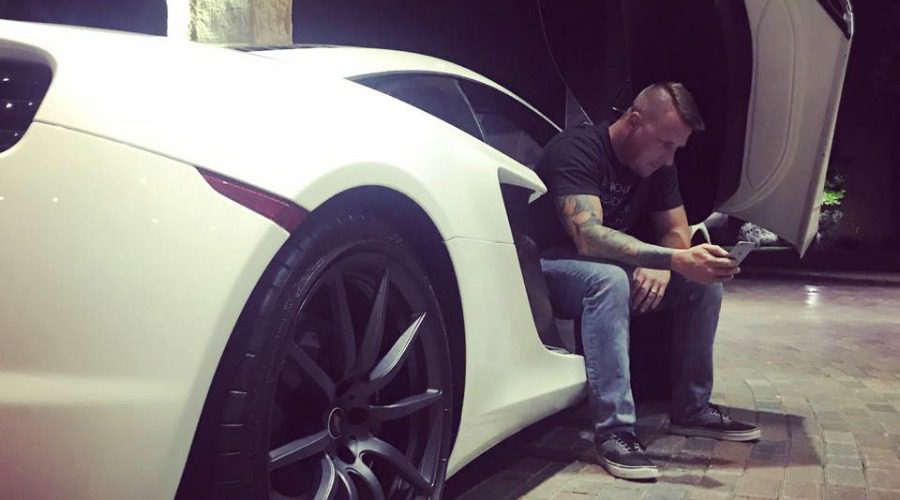 For my birthday last year, my lovely wife got me the ultimate gift. She gave me an MP4 12c McLaren or “12C” for short. The car is white with black rims and tan interior.  It does 0-60 in 2.8 seconds, over 200 miles per hour top speed and pushes around 600 horsepower. In other words, the car is a badass, made-for-speed machine.

I had it delivered to my office and almost cried when it was being backed off the trailer and the keys handed to me. I didn’t even know how to drive the thing, and I had to watch YouTube videos on how to park it and open the doors.
The car was listed for sale at $163,000 and I negotiated it down to $139,000. I made a deal with the dealership. Then sat in instant equity. Exotic cars don’t depreciate like mass-produced cars. If you keep the miles low, the car will stay the same price or appreciate. They only made 1000 of these cars and many of them have been wrecked over the years. As more of them have been wrecked, the value of my car went up.
I’ve been in sales all my life and one of the things we salesmen want to happen is for people to hit us up and ask us what we do for a living. When someone asks me what I do for a living, I have an opportunity to close them on working with me.
The very first weekend after I bought the car, I attended a car meet up in Dallas called “Cars and Coffee.” Over 1000 cars show up, but only a dozen or so are considered exotics. When I pulled up, I was escorted right to the front of the event. It was a pretty cool feeling. Since I’d parked next to the other Lambo, Ferrari, and McLaren owners I could meet them and shoot the shit about business.

From that one event, I’ve made sales and lifetime friendships.

I also started getting invited to exclusive McLaren owner events where other successful business people who own nice cars network. The connections from these events alone have been worth the price of the car. Poor, unsuccessful people don’t own exotic cars, so it’s nice being a part of a networking group where folks actually have business to share with you.

Every time I drive my car, someone comes up to me and asks how they can make enough money to drive a car like it.

I always pitch them on my Funnel Closer program. The program shows people a way to cash in on a much-needed product and a huge trend I call the “dot com bubble 2.0.”
I’ve made videos and run ads with me in the car and they are some of the most successful ads and most watched videos I’ve ever produced. The car attracts eyeballs and where the eyes go, the money flows. People associate exotic cars with success and I’ve leveraged that association to make over $200,000.
Not a day goes by that someone doesn’t hit me up and ask about the car. When this happens, I ask them where they are in life and if they need help going further. You see, most of us guys grew up with pictures of exotic cars in our rooms. We bought Hot Wheels models of them as kids. Most dudes, if they are being honest, will tell you they’ve always dreamed of owning a supercar. When they see someone like me driving one, and I show them it’s possible to have their own, too, they buy in.

I’m saying that one of the best advertisements I’ve ever paid for has been owning a supercar.

Sure it pisses haters off, but it inspires the winners that see it. I’m not concerned if some hater calls me a douchebag. I’m focused on helping those who want to get their own McLaren, Lambo, Ferrari or Porsche.
If you’ve always dreamed of owning a supercar, there’s only one thing you can do to finally get it. The WORK! And not just any work, the right work in the right way, the right amount of times. I’ve got a free training for you that will show you the exact way I was able to buy my first supercar (I own three now) and how you can follow in my steps to get your own. Sure, you gotta make an investment. Sure, you gotta put in work. But the feel of cold cranking a supercar whenever you want is 100% worth it, trust me. I know firsthand. You can watch the free training at www.funnelclosers.com
← Converting Your Social Media Friends and Followers Into Paying Customers ReWire 001: Trying To Lead Above The Level You're On →