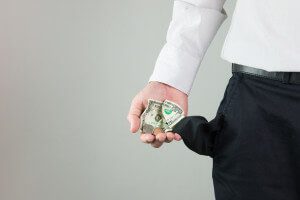 If you’ve been in sales for more than a day, you’ve heard one or more of your prospects say “sounds good but I don’t have the money”.  It’s gotta be the #1, go-to, objection we hear from our leads.
There are two schools of thought on how to deal with this objection.  Let’s take a thorough look into both of them and I’ll let you decide which path is for you.
First off, there is the old school way to deal with this objection.  I’m not saying it’s old school because it’s out dated, I’m simply calling it old school because it’s the older of the two paths you can take.
The old school path requires you to be reactive.  When they say “I aint got it” you’re now in the search for it mode.  This is when we say things like “If I were to tell you that if you invested $XYH into this company and you’d get a 10,000% ROI would you do it?”
It’s called “the come on game” where we keep at them until they come on over to our way of thinking and eventually buy.  A solid, relentless, salesman will stay in the come on game until the prospect leaves, hangs up, buys.  It’s hard to find a salesman who can do this, but when you get one DON’T LET HIM GO!!!!
Most salesmen are not confident enough to really push a product on someone.  As the old saying goes you can’t sell something you don’t believe in, unless you’re a con man.  Finding someone to drink the company kool-aid other than yourself, is not easy.  It can be done, but it ain’t easy.
This old school method is known and used widely in insurance, mlm and other industries which sell products that can be used by the masses.  It takes a pushy person to fight through the objections by removing emotion and everything else needed to take this route.

And then, there’s the new school way of handling this objection.

The new school method requires just as much, if not more confidence in what you offer.  It can be used no matter what you sell, or who your target audience is.  It’s highly effective, low pressure and relatively low stress.
This new school method I’m referring to is simple.  The new school method is to simply not attract broke people. End of story.  Why in the hell would you want to sell to people who don’t have money?  They make terrible clients!
People don’t have money for a reason.  9 times out of 10, that reason is lack of action in their life.  To be more clear, THEY do not take action.  If they did, they’d have money.  I know it’s nice to see potential in someone, but that takes work.
I’d rather work with a person who has already somewhat mastered their world, than have to help someone with potential realize it.  It’s much easier to show results for someone who’s got it all together, than someone who don’t.
It takes confidence to take less sales calls to make sales. Most of us, think we need to make 100s of calls in order to close a dozen or so people.  We have this thing embedded in us (probably from our first manager) that makes us stay busy.  We are always trying to sell people who aren’t qualified to buy.
What if you only had to make a dozen or so calls to get those same results?

What if you ONLY talked to those dozen who were ready to buy from you?

What if you spent the rest of the the time that’s now free, due to not wasting time on broke prospects, on marketing and advertising to the right people.  Making sure you had the best sales pitch you could, and it was in front of them every what possible.
You see, this is where advertising and marketing are crucial.  Broke prospects don’t speak the same language as living in abundance.  Broke people use words like I’ll try or I hope while people who live in abundance say I will and then get it done.
One thing we are good at, as salesman, is working too damn hard for our money.  If you’re chasing broke people, convincing them to take a million steps to get the money to come to you, holy hell, you’re doing it wrong.  If you spent that same time chasing whales, you’d be one yourself.
I’ll give you an example.  In real estate you make 6% of the sales price of the home you sell.  If you sell a 100k home, you make 6k, but if you sell a 1M home, you get 60k.  As an agent, you’ll work 100 times harder for the 6k than you will for the 60k.
People who can buy the 1M home have good credit, cash down and their own network of pros to accommodate them. People buying the 100k home are most likely first timers, mid to bad credit, little money saved and no experience or team to help them.  Only you.
The best/worst part: You’d have to close 10 times the 6k transactions, with 10 more clients, who have 10 times the need, in order to make the 60k from selling the one house to the person with money.
Sure, it may take you longer to sell the million dollar home, but it would take you 10 times as long to find, list, and sell the 10 others needed to match the commission.
Check out this video I made for you about the “money objection”.

How To Handle The “I Don’t Have The Money” Objection

There you have it, the math don’t lie.  Some of you are simply gluttons for punishment and working too hard.  If you’re tire of busting your ass to get deals closed and you’re ready to step into the new school world of selling, simply fill out the form below and let’s talk.
← What Consulting Clients Really Want From Hiring An Expert What Makes Me a Badass Salesman [Video] →