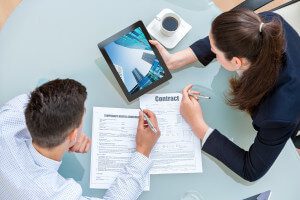 When you are first getting started off in any sales business, it’s hard. There. I said it. I wasn’t kidding either. Seems like every time I’ve ever started a new business the prospects must have had “new” radar. And when prospects spot a green pea, they almost always throw out the one objection that’s hard as hell to counter without sounding like a total idiot douche. You’ve heard it. I’ve heard it. And we have both looked like morons when they hit us with it.

“Do you have any people who I can call and ask for testimonials?”

It’s as if they know you don’t, and they are trying to win some sort of I’m Right contest. Meanwhile, you’ve been talking to them, showing off your product like you’ve been in the business 25+ years. So, then you have to explain why you know so much, but have sold so little.

It sucks. It’s embarrassing and it happens to all of us. Being a pro salesman is all about adaptation, though. You’ve got to set the proper expectations up front. When you’re new, don’t pretend to be anything other than what you are.

When I started selling cars, people would come in and ask me questions about horsepower, etc. Now, I’m not a car guy. I can’t change a tire or oil and I don’t know anything mechanical. I also gave my bud, Sal $100 to take the car tests for me, so I could get certified. Literally, I didn’t know sh!t.

When I had questions I didn’t know the answers to, I’d just tell the prospects, “I don’t know, but I will find out for you before we close the deal.” This allowed my prospects to see firsthand I wasn’t a know-it-all salesman. It also showed them I was resourceful and able to get the information they needed.

Meanwhile, in the consulting business, it’s different. We sell success, and people want to see others who have bought and obtained that success from us. When you’re new, you obviously don’t have the track record to show anyone your list of happy clients. So, what do you do?

When I had my first conversation with Steve Green, he told me he was in a spot. He said his top agent had just left the business and he needed to replace her ASAP. I told him what I could do and showed him how easily we could put it into play.

When Steve asked me what people he could talk to about my stuff, I was straight up with him and said, “I don’t have any. So far, I’m the first and only person to do this stuff. It worked for me. It will work for you. When it’s all said and done I want YOU to be the guy people call to get testimonials about my work. You’ll be that guy, but it starts with a decision to work with me now.”

I didn’t have to lie. I didn’t send him to a fake testimonial person. None of that was needed. He just needed the reassurance I was going to do what I said. And of course I did exactly that. Now, Steve has been a client for over two years. When someone reaches out to me who needs to hear a third party, I send them to Steve.

He now does exactly what I told him he would do on that first phone call. I promised to make him the guy, and I did.

As salesmen, we are tempted to cut corners because we know our prospects usually don’t trust our word. I’ve done my 100 percent best to live by my word and I still get static. I can imagine what the “average guy” goes through.

So, instead of trying to BS your way into your first client, just be up front, set expectations and tell them you want to make THEM the first and best testimonial you’ll ever have. There’s a catch to this, though. It’s not just sunshine and rainbows when you make this promise to them.

Once you tell them they’re your number one, your next job is to serve them like you’ll never have another client. Since you don’t have a lot of clients, you can take the time to make their experience the best. You CAN follow up with them to ensure everything is working according to plan.

If they take a chance on you, knowing you’re a rookie, you’d better go above and beyond to make a friggin’ example out of them. Do 10x whatever it is they expect. When you do this, they will also be more than happy to provide future testimonies for you. But only if you make an example out of ’em.