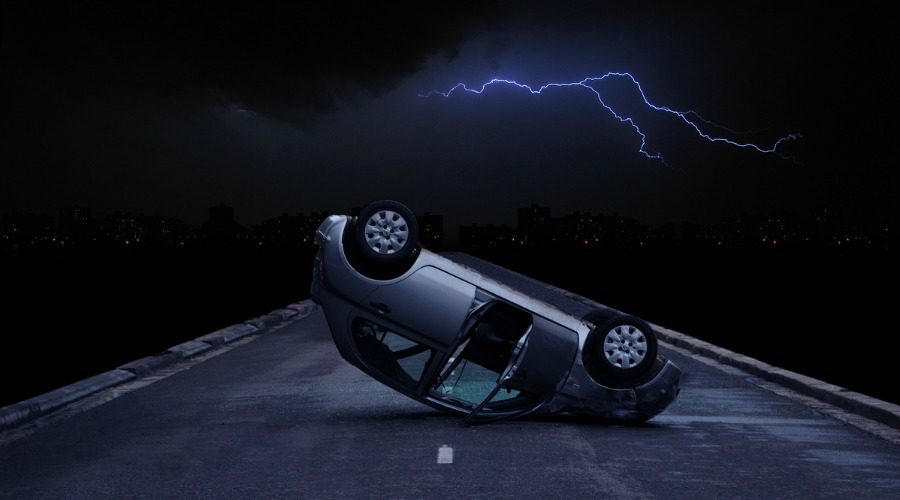 Today, while driving, I was sitting at a red light in a busy intersection and I saw a guy get waxed by a vehicle. (P.S. “Waxed” = Hit.) The guy was just stepping out to cross the street when a car turned right and bam! Because the car was turning from the guy’s left, it hit him from the side, catapulting his feet into the air, leaving his hands mashed on the hood as the driver of the vehicle dropped a lead foot on the brake. The car screeched to a halt…and really…that’s when I looked up.

Truthfully, I didn’t even see the collision, but I figure that’s about how it went.

If you’re asking yourself why the hell I just gave so much detail about something I didn’t even see, it’s because we have to imagine the incident to draw out what is so important about the aftermath.

The lesson is in the aftermath…

You see, when I looked up, what I saw was two people after a potentially catastrophic event, pointing fingers at each other. Within a millisecond after the collision, the driver opened the door and pointed at the crosswalk sign. At the same time, the pedestrian who could hardly figure out whether he could walk or not was pointing at the hood of the car and then back up at the crosswalk. Both parties were obviously embarrassed and disoriented. What’s so interesting is how we as humans are programmed to react. Our programming tells us to blame someone quick!

Think about this; before the driver knew whether she had maimed someone, her immediate reaction was to spout anger…

…project fault and prove she was the victim. Same for the pedestrian. This dude couldn’t even keep his feet beneath him as grasped for something to keep upright but went straight to arguing his case. I’m dead serious. He had the feet of Gumby with the shoulders of an NFL linebacker. Before he even knew if he was okay, his immediate reaction was to be mad and point the finger at the person who hit him.

Truth be told, I have no idea whether or not the LED illustration of the little man walking was lit or if the big red hand was up. What I do know is it should give you some insight.

Now, while you may be saying, “Andrew, yeah, no shit. That’s the way people work…” Think a bit more about how you can use this to your advantage. First, realize, we as humans, are naturally on the defensive. We’re so insecure about our decisions and caught up in proving we’re right, that oftentimes, we have no earthly idea why we are even arguing

So, why does it matter?

While you hopefully do not get hit by oncoming traffic in your life,  you will face failure. Things won’t go your way. You will take public risks that go sideways on you. You will be tempted to draw the blame card loud and proud and scream, “I’m the victim!”

But what if you committed to handling adversity differently than the loud majority?

What, if when a situation turned south, you stopped, and objectively thought about how you could’ve avoided the situation? Could you use that as a weapon for the next attempt?

I’ve heard that successful leaders react to what happens around them differently than others. In moments of success, they look out the window to give credit to someone. In moments of failure, they look in the mirror to evaluate what misstep they, themselves have made to attribute to the loss.

The more you approach every failure as an exciting opportunity to ask, “What could I have done differently to have received a different result?” you’ll begin to fill your life with more success faster, easier and more frequently than you have in the past. That means you win or learn; there’s no such thing as a loss in that scenario.

When things don’t go according to plan ask yourself:

Our basic human instincts are powerful, but when you learn to hack your instinctive behaviors and morph them into powerful tools, you become a category-of-one player. That is, there is no one else like you on the field because you have changed the game.

Put this practice into play the next time you feel the instinct to cry victim and let me know how it works out!

If you found this information helpful and want to be plugged into a group of other like-minded business thinkers, click the link here and join Small Business Big Thinkers.  If you’re a Service Industry Pro who’s crushing it in the trades or general contracting, I’ve got something special for you. Jump head first into Service Talk with Service Pros here. We’ll be waiting for you on the inside.

← Jeff Bezos Is Officially the Richest Person Since King Solomon. Here's How He Did It [Video] THC Podcast 100: The Hardcore Closer Podcast Greatest Hits - The Top 5 THC Podcast Episodes →