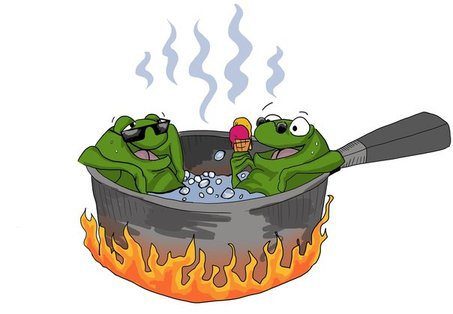 Crazy doesn’t just show up at your doorstep one day with a butcher knife screaming at you. Nope. That’s not how it works at all. Crazy is sneaky as fuck. It sneaks up on you little by little and before you know it, “FUCK!!!!! IT’S HERE – MAKE IT GO AWAY” 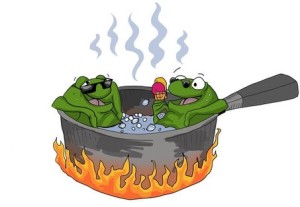 Yep. We all know it too well. From crazy clients and business partners to crazy ex’s. Crazy rarely shows up to the party early.   This week I’m going to teach you a little something called “The Boiled Frog Theory”. Simply put, you can place a frog in a luke warm pot of water and slowly raise the temperature, even all the way to a boiling death, the frog won’t jump out.   Psychologically the frog is committed to it’s circumstance and it doesn’t realize it’s hot until it’s too late. Think about it; A lot of shit works like that here on Earth. From selling to humans to boinging amphibians, we’re gonna talk about it all on this one.