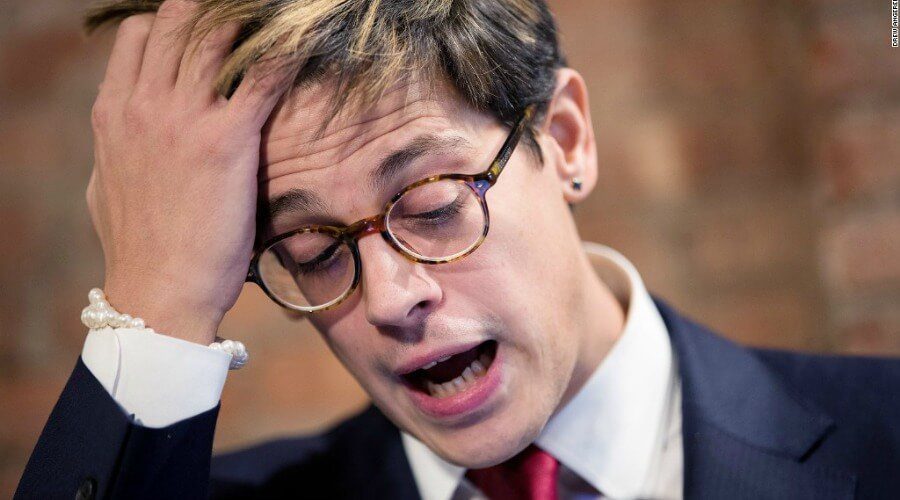 The dude was on a roll. He was out there making bold claims, shaking trees, making shit happen. He had a book deal, an editor spot with Breitbart and played a crucial role in the alternative media movement. And then it happened… He talked himself smooth out of a laydown sale. We’ve all done it, and we watched Milo jabber his way right out of the biggest sale of his life.
First let me just say, I’m not a fan or a hater of Milo. I found him to be an interesting person, who’d had a rough upbringing which led him to be quite controversial. While I’m not as extreme as he is, I’m no stranger to controversy. So, I’ve watched from the sidelines: his rise and plateau. I said plateau because I don’t think he will fall. There are always some die hard fans who won’t leave no matter what.

Here’s what happened to Milo that happens to salespeople every day.

Milo had it going on. He had a book deal; the public was citing him as a source of information and he fit the mold of someone who could be a poster boy for truth. He’s gay, has a black boyfriend, is a foreigner and hits just about every demographic you can conjure. This enabled him to say stuff that could be said without screaming racism or xenophobia.
Milo was making phenomenal strides. He was causing riots, selling out his book tour and getting tons of Tucker Max-style PR. Then, out of nowhere, he made snide jokes about pedophilia. That shit ain’t funny to anyone. All of a sudden, he lost the book deal, a huge amount of followers, all credibility and I’m sure he’s lost a lot of sleep.

He had officially said too much.

This happens to salespeople all the damn time. They get the prospect going, telling them everything they need to hear; the prospect is all into it, drinking the Kool-Aid and then the salesperson just can’t shut the fuck up long enough to collect payment. You’ve seen it. I’ve seen it. We’ve both done it at one point.
Arming the prospect with too much information only hurts them. It gives them too much to think about and too much information causes indecision. Americans like it short, sweet and easy to understand, so it’s a snap to make a decision. The more you talk, the more information and confusion you’re throwing their way.

This ALWAYS does more harm to your sale than good.

A true salesman speaks less than he listens. The best way to come off as an empathetic helper is to ask questions, listen and only give your opinion when asked to do so. If you’ll follow these simple steps, you’ll never talk yourself out of a sale again. Remember, short, sweet and simple to understand.
If you’re looking for some badass material on sales, check out our Entourage program at www.breakfreeacademy.com/entourage
← THC Podcast 052: THC Podcast Year In Review Microsoft's CEO Just Sold His Employees on the Importance of Staying Focused →