Three Reasons Why Tommy Boy is The Best Sales Movie Ever 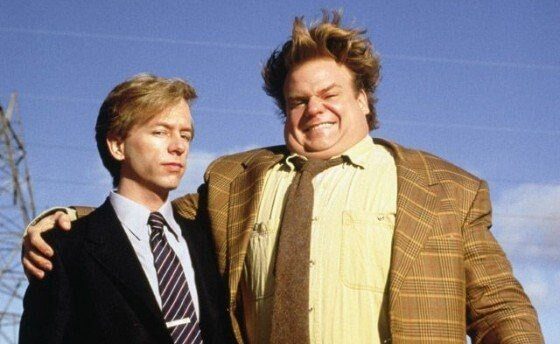 When you typically think of the best sales movie ever you think Boiler Room, Glengarry Glen Ross, Wolf of Wall St etc. The movie Tommy Boy doesn’t usually come to mind. But it should!

The thing about most sales movies is they demonize us sales guys. The salesman never wins and in the above mentioned movies the salesmen go to jail.

But not Tommy Boy. It’s the only sales movie I know of that the sales guy works hard, develops his pitch, delivers an ethical product and wins in the end. There are so many lessons to be learned from this flick.

Think about it. In Wolf Of Wall St Jordan is an insane degenerate that’s high, drunk and promiscuous. Boiler Room ends with all the rich sales guys getting raided and going to prison. Spoiler Alert!

Tommy Boy ends with Tommy saving Callahan auto parts from that evil dick Zilinski. He fails time and time again but learns from every experience and grows personally. I’ve always said “sales is a personal development program with a commission attached to it.”

I know Tommy Boy was intended to be a comedy but I shit you not, I watch it as often as I can to remind me of the struggle and growth potential of the common salesguy.

There are a ton of lessons to be learned from this flick, but what I’ve done is extracted three simple, yet proven, reasons why Tommy succeeded and did so with ethics and exce
ptional service to his clientele.

Lesson #1: Get a mentor who will tell you like it is.

You may not have thought of Richard as much of a mentor for Tommy, but that’s exactly what he was. He was a dude that worked for Big Tom Callahan and had experience he could share with Tommy.

Tommy knew he couldn’t go at it alone. He grabbed someone with experience to help on his journey. Even though he and Richard didn’t always get along, Richard knew the people and what to say to make deals happen for Tommy.

Richard didn’t sugarcoat shit. He told Tommy exactly how he felt about him and kept him in check. He even had to hit his fat ass with a fucking 2×4 to get the point across, but Richard was willing to do what needed to be done to help Tommy succeed.

Tommy and Richard didn’t hit the road making in person sales calls to new clients from cold contacts. What they did was hit the road to rekindle relationships with their existing database.

It’s much easier to sell more shit to people who are already happy with the shit you’ve already done and sold to them. It costs a hell of a lot more to acquire a new client. It takes time, money and marketing to get new clients. If you have new shit to sell already happy clients, it’s a lay down close.

When they first hit the road, Tommy and Richard are repeatedly told “no”. The average salesman would have given up and said some dumbshit comment like “our product sucks they won’t buy it.” Not Tommy, he kept on and kept on until he closed his first deal.

If you notice, each time Tommy is denied he was not being himself. He was trying to be his father. Once he was told “yes” the first time, he learned from it. He learned to be himself, honest and deliver a killer product to good clients. That’s all it takes to be a true Closer ya’ll.

Truthfully, I could go on and on forever about different lessons we could all stand to learn from Tommy and Richard but I’ll leave you with just three this time.

When you watch the movie you might find yourself laughing your ass off at Tommy’s mistakes but at the same time you see Tommy learning, growing and perfecting his pitch until he became an empower Closer.

If you’d like a mentor who will keep it real with you and occasionally hit you upside the head with a 2×4, I’m that guy. All you have to do to get in touch with me and talk about how I can help you is fill out the form below.