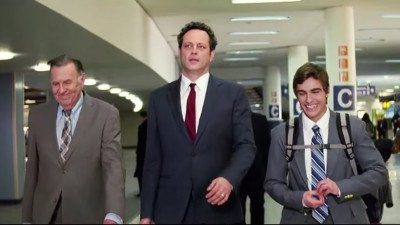 Before you read any further, just know this is a HUGE SPOILER ALERT! I’m gonna give away the movie in this post, so if you haven’t seen it, don’t say I didn’t warn you.
So yesterday, my GF and I went to see this movie titled Unfinished Business.  It’s a movie about three salesmen willing to do ANYTHING it takes to overcome.  It’s supposed to be a comedy, but to salesmen like us, it’s not comedy, it’s more like Rocky.
Don’t get me wrong, the movie is funny as fuck.  Vince Vaughn is always good in a type A personality role.  The role he played in this movie fit him perfectly.  The two moronic sales dudes that are with him, did a helluva job too.
It’s a good movie and I recommend you go see it since you are in sales.  Don’t go see it for the comedic value though, go see it for the first hand lessons that ALL salesmen need to learn.  There are so many sales lessons to be taken away from this film it’s unreal.
Allow me to break down each lesson, how it fit in with the movie and how it can affect your sales game for the better.
Lesson 1: Every Salesman Has Family Shit To Deal With
A lot of it is for comedic value, but Vince Vaughn’s character has a world of shit trying to keep him from closing his big deal. Family can be the biggest distraction you have.  Doing what your family wants and not what needs to be done, can cost you a fortune in sales.
Vince’s kids are getting bullied, he owes school tuition, and his family keeps begging him to stop working and return home.  He’s got more shit going bad with his wife and kids, in this two hour movie, than they did in the entire Brady Bunch series.  That doesn’t stop VV and his team though.
Each time his family begs him to come home, he reframes their thinking and shows them how his eyes are on the prize, and theirs need to be too.  Don’t we ALL face this?  Long days, lots of travel and all the shit that goes along with our jobs, can make our families miss us and distract us.

Lesson 2: Sometimes You Have To Make Shit Happen In Person
Originally VV and his team set up a meeting in St. Louis, where they live.  Once the competition starts to heat up between the other vendors, VV and the team start traveling, to personally meet the people they hope to be doing business with.
In the movie, VV repeatedly says “a phone call won’t work, I gotta have a handshake.” He knew the way the people he was prospecting worked.  He knew they were the type of businessmen that needed to see shit in person.  He made that happen.  He even set up last minute tickets to another country to get the handshake.
The lesson here is, if it needs to be done in person to close, you go the distance no matter how far away it is. If your prospects prefer to be closed in person, you better show up. Close them how they want to be closed.
Lesson 3: You Don’t Need A Team Of Geniuses To Make Sales
I wanted to kill VV’s two selling sidekicks in the movie about 100 times in 2 hours! Mike Pancake killed me.  He was slow as fuck, which made for good comedy, but as a business owner he frustrated the shit out of me.
As stupid as Pancake and the old man were, they were equally loyal.  When VV said he needed them to hop on a plane to Germany they got on.  When he needed them to spend their last dime to believe in him, they did.  Loyalty can trump smarts AS LONG as you have loyalty in the right roles.
The lesson here is, assemble loyal employees and keep them in their element.  If you can help them master the small things, their loyalty will allow you to master the BIG things.  Smart people spin off and become your competition.  Loyal people stay down as fuck and just wanna ride with you.
Lesson 4:  Know How To BEST Use Your Leverage
When they are at the Folsom gay pride party and they see the big-dicked assistant, they didn’t blackmail him.  First off, that wouldn’t work in Germany, but more importantly they tried to help him instead of hurt him.
In exchange for the help, the BDA made a bold move and went around the asshole VP and took them straight to the CEO. They made a friend on the inside and it paid off for them big time.  They could have made an enemy by way of blackmail but they chose the other path.
The lesson here is, when you have information or leverage over someone you need to know what is best to do with it.  Leverage can help or hurt you.  Assess all angles before you potentially fuck up what you’ve got.
Lesson 5: Never Ever Ever Give Up
Holy fuck! It seemed like the world was against VV and his team.  You know what though? They never quit. From glory holes to riots, these guys stuck in the game and took every “no” they got, until they finally got their “yes”
The family begs him to come home, his #1 competitor and arch enemy beat him to Germany and the VP is a total douche who doesn’t want to work with them, numbers or not. The team takes all this in stride and never overreacts.  They calmly solve problems and move on.  There’s no excitement just solutions to shit that happens.
The lesson here is, shit is gonna happen. Things are gonna distract you.  People are gonna try to stop you from reaching your goals. None of that matters.  Your job in sales is to solve problems and move on.  Nothing more nothing less.  Problems solvers close deals.
I recommend smoking a fat joint and watching Unfinished Business (if you’re into that kind of shit). You’ll love the movie and all the lessons it has in it.  It reminds me a lot of Tommy Boy. Shit needed to be done and in the end it got handled.
All the distractions in the world couldn’t keep VV from closing the deal.  Don’t let anything in the world keep you from closing deals.
← Who's Really To Blame For Lost Real Estate Deals? Strategic Selling With Social Reconnaissance [Video] →