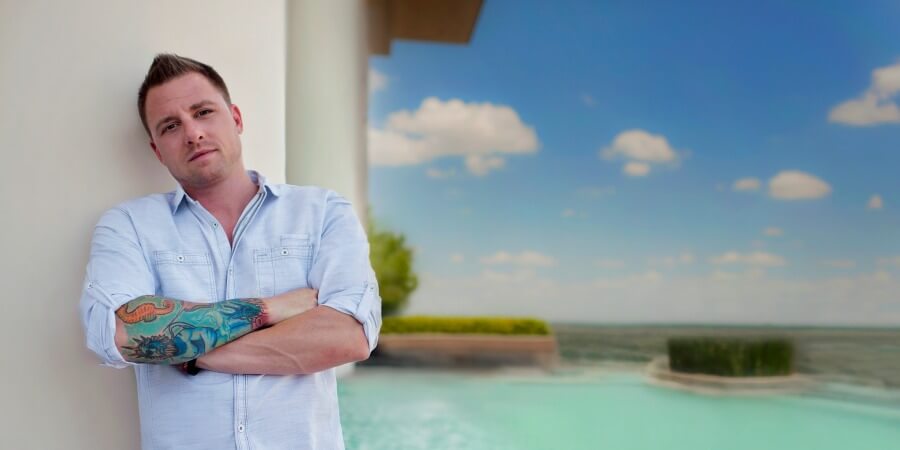 At 5:54am on a hot summer day in July of 2008, I was released from federal prison. It was nothing like you see on TV. There was no old friend there with a briefcase full of money and some snakeskin boots welcoming me back to society. There was only a check for $25 and a Greyhound bus waiting to take me and a few others to various halfway houses around the country.
For the next 15 days, I’d anxiously await full release from the system, which would come when I would leave the halfway house. I paced around that place for two weeks waiting to get out. It was the longest two weeks of my life. I was worried sick. I had no money. I had no help. No job lined up. I had nothing.

It was a completely different story in 2007 when I went into the prison system.

I walked into the prison as a millionaire. I had real estate holdings, stock equities and six figures in cash when I turned myself in. After about 90 days in the system, my (then) wife left me for another man, sold my holdings, sold my stocks, and spent my money. I got a “Dear John” letter after only 3 of my 15-month sentence.
When I got out of the halfway, I didn’t have clothes, furniture, soap, deodorant or anything. More importantly, I didn’t have a job. I was in serious trouble. I had been reading books about coming up from the bottom for the last 2-3 months of my lock-up. I knew it could be done; I believed I could do it. I just had to make sh*t happen fast.
My stepfather picked me up from the train station and his first words were, “You can stay with us, but I’ll never help you if you do this again,” which was funny because it was his damn gun I had done time for and they lived in a house I had bought for them. Hence one of the many reasons I don’t f*ck with my family.

Regardless, I had no support.

I hated living with my parents. Hell, I hated my parents, let alone living with them at 29-years-old after I thought I was gonna conquer the world. But there I was, living in the back bedroom of my parents’ house like a friggin loser who can’t get his life together.
It took me about 45 days to land a job, get trained and turned loose on the phone. I was hired at a large mortgage company despite my criminal past. They took a chance on me, and I had a lot of work to do. Within 3 months I was the top producer in the company. It was the worst year on record for mortgages in 2009 and I was so hungry I closed 183 loans all by myself. I had a lot of lost time to make up for. Within about 45 days of being out of jail, I moved in with a woman, to get away from my parents’ house.
I thought I was back at it and on my way to making millions again in mortgages, but in 2010 I would be in for a BIG surprise. President Obama signed something called the Dodd-Frank Act into law and a clause in the law said felons could no longer hold a license to do mortgages. I lost my ability to originate mortgages in March of 2010. Which was rough, I had already closed over 70 loans that year.

Here I was again, without a job.

I went from earning multiple six figures on my W2 to being jobless again. This time I had bills, a wife dependent on me and my savings was dwindling fast. I, 100-percent never saw any of this coming. It was a serious blow to my progress.
I went to ask my homie Mike Reese for a job helping him market his real estate business and he gave me some DVDs from Ryan Deiss. Those DVDs opened my mind to the world of Internet marketing. This was in late 2010, and there were no leadpages, click funnels or easy ways to do Internet marketing. I had to learn to code, use WordPress, and a million other things FAST. I spent many nights without sleep, trying to focus on getting this Internet marketing thing down.
In early 2011, we discovered my (then) wife was pregnant. I wasn’t making any kind of real money on the Internet yet and I had to take a job selling cars. I sold a lot of cars and in between sales I would record podcasts, write blog posts and make videos.

The other salesmen thought I was nuts but I wasn’t giving up on my dream.

After my son Jax was born, I quit the car business. I had only worked there so I had insurance coverage in case something went wrong with the pregnancy. As soon as Jax popped out, I left. I loved selling cars but I hated how the car dealership I worked at functioned.
In January of 2012 I registered HardcoreCloser.com. I started out managing people’s social media for them. I’d write 2-3 posts for them a day and answer their DMs. I charged $500 up front and $100/month. I did it all through HootSuite. Then I got up to 70-something clients and I shut it down. It was too much work for one person. I learned a lot about social media, though—from 70 different perspectives.
In 2013, I started doing a small mastermind called “The Tribe.” I charged people $1,000 for 6 weeks of training on social media. I got up to about $10,000 a month selling this process. Things were starting to get back on track for me and I was making money again. Plus, I wasn’t doing the work, I was teaching others about the work.
In 2014, I started Break Free Academy which is a 2-day, live event, where I teach my methods to people. We sold 5 spots at $2,500 on our first event. The goal was to move the people from the live event into The Tribe which was now going for $10K per year. Out of those 5 first BFA attendees, 4 went on to take me up on the $10,000 upsell offer. I knew I was on to something. In 2014, my net income for the year was $96,000.

I was nowhere near where I needed to be but I was on my way back.

In 2015, I finally caught momentum. I released a digital version of my live event and priced it at $1,997. We sold over 500 of them throughout the course of the year and had 50 people in the Tribe at $25,000 per year. My net income more than quadrupled in 2015 from 2014. I was having the best year of my life. I rented a penthouse and drove a Maserati.
In mid-2015, I started going really hard on Facebook ads. I had used FB ads from time to time since 2013, but in 2015, I had the money to heavily invest in running ads on Facebook. As a direct result of those ads, I started seeing my brand grow by leaps and bounds. It was in the later part of 2015 that I started hiring people to sell my products and support my clients. Five years later, my dreams were starting to come true.
In 2016, I doubled down on Facebook ads and added speaking engagements to my marketing arsenal. I spoke at huge conferences in front of thousands of people, several times. I was in extreme momentum and I enjoyed every minute of it; 2016 was my first year to break 7 figures in sales and we did it multiple times!!!

My dream is now my reality.

This year, my companies have already closed over 5,000 sales. We are on track to hit 6 million in gross sales and I have a team of 12 people helping me run the show. I live in one of the nicest neighborhoods in the country, have a fleet of cars, own several houses, my stock portfolio is up 13% so far for the year and I own 6 companies.
To think just a decade ago I was walking out of that federal pen wondering what in the hell I was going to do with my life and how I was going to earn enough money to eat my first meal. Now, I can eat wherever I want and do whatever I want. No matter how hard life throws a punch at you, take it, and immediately swing back. Oh, and shoutout to the ex-wife who left me while in prison. She made me so mad she gave me the fuel I needed to become a savage when I got out.
← The Perfect Prospect Exercise [Video] THC Podcast 068: Is Sales Management Right For You? →