What To Do When A Client Doesn’t Pay You 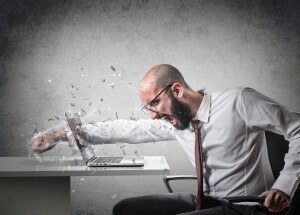 They’re the leading cause of heartburn amongst entrepreneurs world wide. They’re the reason collection agencies were born.  They’re the reason you have to sign on the dotted line for everything you do.  Who are they? DEADBEATS. Let me tell you what to do when a client doesn’t pay you.

Let me share a valuable lesson I learned from a deadbeat client.

Man, nothing pisses me off more than a person who doesn’t pay what they promised to pay.  I used to be in the foreclosure bailout business, and I’ve heard the most asinine excuses that grown men could concoct.
I’ve always paid what I owe and then some. Because of that, I get super heated when people don’t pay me.  What’s worse, is that there are laws (no one tells you about by the way) to protect deadbeats, not business owners.
For example if you call out a deadbeat on social media for not paying you, you could end up in a lawsuit.  Rarely does the deadbeat win, but it’s an annoying waste of time regardless.
It a scary cycle.  With bankruptcy laws, debtor laws, and the million other laws out there, that no one even knows about until it’s too late, it’s a touchy subject to deal with, when you’re owed a debt.

Having a deadbeat on the books can really hurt a business too.

I’ve been fortunate to only have to deal with this situation a handful of times in the 10 years I’ve been in sales.  Each time I learned a valuable lesson and made the process that much harder on the next person.  One bad apple will always ruin the whole bunch.
When you have someone stiff you for thousands of dollars it stings.  I had a dude come through BFA in January and he stiffed me.  He had a shitty attitude and even wanted to “meet in a parking lot” (lol) like we are not business men, and we are in high school again.
I’ve been mad enough to meet people in the parking lot before, but only because they owed me, not because I owed them.  We live in a crazy entitled world.
Like I said, each time this has happened to me, I’ve learned several lessons.  A lesson about me, a lesson about people and a lesson about business.  Allow me to share my experiences with you for your benefit.
When the guy from BFA in January stiffed me, I really needed the money. There’s never a good time to miss out on a $5,000 check.  I was going through divorce and bleeding cash buying furniture, paying legal fees and all the other BS.
The way he scammed me worked like this.  He worked for the mortgage company I used to work for.  He said the company would pay his entry to BFA.  I knew the company, spoke to the manager and agreed that was fine.
Then, right after the event he got fired from his job.  If I were to guess, it was due to having a sh!tty attitude, but I wouldn’t find that out for a few days.
The last day of the event arrived and he still hadn’t paid.  He swore the check was in the mail.  He swore he was all good.  Then about a week later, still without paying, he was fired.
I called him, his work and everyone in between and all I got was the run around.  I was pissed, but worse yet I was screwed out of my money.  Even though, the little guy kept promising he would pay me and he had loans closing.
I know there were several options I could take advantage of.  I could report against his NMLS license, I could sue him and his employer who promised to pay and a million other ways to get my money plus interest back.
I hit him up via facebook messenger one last time and it escalated to the point where he wanted to meet and fight lol.  Again, I’ve been around.  This guy was 5’3 160 pounds, if I hit him, I’d owe him money and end up in jail.
That’s not the point, we are adults not kids.

I just wanted to be paid the money I clearly earned.

I started to go over my options and routes for revenge.  At first, I wanted to beat his a$$.  I wanted to sue everyone involved.  I wanted to wage war.  Then I thought about how exhausting that would be.  How big of a negative impact it would have on me personally.

I made a decision that I still stick by today.  I forgave the debt.

Despite this little d!ck being an a$$, I forgave his debt.  Not forgave him, [email protected]!K that guy. Instead of wasting my energy on chasing him, going to court and all the other crap I’d have to deal with, I let him go.
I don’t care who you are, five grand is a grip of money to throw away.  At the same time, I can earn 100k in the same time frame it would take me to go to court, hire attorneys and the likes.  As a smart business guy I decided to stop the chase, like a cop chasing a motorcycle, I just gave up.
Guess what happened?  I made more sales the very next day.  I never even missed the money.  It was the law of attraction rewarding me.
More importantly, the lesson I learned was to never take a client who wasn’t paying with their own money and up front.  I took the time to reflect on what happened and put a plan in place to make sure that didn’t happen again.
The next time I’m tempted to take on a client in a similar situation, I’ll remember the pain and suffering that came from this experience.  Trust me, it will keep me from repeating the mistake.
I also learned about how terribly I can handle certain situations.  It should have never come to the threat of fighting. I should have just backed away and either let a lawyer deal with it or let it go.  There’s nothing good that comes out of arguing.
Honestly, the blame lies 100% with me.  I shouldn’t have taken the guy on from the jump.  I wanted to help and make a buck more than I wanted to be a businessman.  While the gesture is nice, it will bankrupt you.
If you’ve not been ripped off by a deadbeat, it’s coming one day.  My best advice for you is to have contracts in place and be VERY selective of who you decide to call a client.
Sign up below if you’d like to speak with me about what it takes to get my help in your life, business and boldness.  Fill out the form below and let’s go from there.
← How To Structure A Winning Sales Pitch For Shark Tank Why The Best Salesmen Get The Hottest Girls →